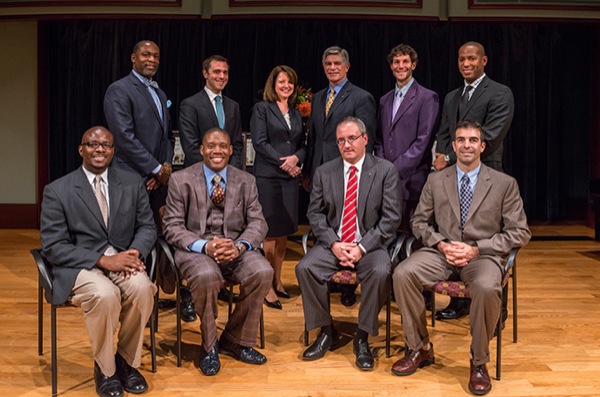 Catching Up With Friends 2014

Alumni are an important part of our CEHD family.

Here are a few graduates who have shared what is happening in their lives.

Ann M. Palmer, ’76, is President and CEO of the Arthritis Foundation and was elected to the board of directors of the National Health Council.

Three CEHD alumni were selected as their school district’s Teacher of the Year by Delaware’s Dept. of Education:

Lara Andrews, HDFS ’13, signed with the Pennsylvania Rebellion, a professional softball team and is pursuing her master’s in Human Development and Family Studies.

James Cavanagh, ETE ’14, is a first year teacher at North Star Academy in Newark, NJ, and was featured in an article in The Atlantic titled “Can a Teacher Be Too Dedicated?“.

Tim Dalby, ETE ’99 M ’11, and Jeanine Moore, HR ’91, were Delaware’s recipients of the Presidential Award for Excellence in Mathematics and Science Teaching.

Lindsay Irwin, ETE ’14, is teaching at the Niagoya International School in Japan.

Sherry Kijowski, M.Ed, EdD, has been named Delaware’s Distinguished Principal of the Year by the National Association of Elementary School Principals.

Allen Prettyman, HDFS PhD ’11, Director of UD’s Nurse Managed Health Center, has been selected to receive the 2014 State Award for Nurse Practitioner Advocate from the American Association of Nurse Practitioners.

Melissa Simpson Tracy, ’10, a social studies teacher at Conrad Schools of Science in Wilmington, has been selected  as a Hope Street Group 2014 National Teacher Fellow.

Mike Adams, HS ’04,  a safety for the Indianapolis Colts, played in the NFL’s 2014 season AFC Championship game. He was then selected to play in the 2015 Pro Bowl. Adams is an 11-year veteran in the National Football League.

Emmanuel Caulk, Jr., ETE ’96, M’02, was presented with UD’s Presidential Citation for Outstanding Achievement in October. Caulk is the superintendent of Portland Public Schools in Portland, Maine, serving 7,000 students PK-12 and over 4,000 adults in the Portland Adult Education program. Previously, he served as the assistant superintendent with the school district of Philadelphia.

Cassie Gomes, HS ’09, is Director of Volunteer Development for PAWS for People. She was featured in UDaily in October for her research on therapy dogs.

John Scali, AS ’99, MEd ’05, has been named the 2013 Delaware High School Teacher of the Year by the American Chemical Society (ACS). Mr. Scali teaches at Concord High School.

Jennifer Nauman, ETE ’99, principal at Cape Henlopen’s Shields Elementary, received the 2013 Terrel H. Bell Award for Outstanding School Leadership. She was one of seven principal to receive this national award and the first principal from Delaware.

Emmanuel Caulk, Jr., ETE ’96, M’02, (above) was presented with UD’s Presidential Citation for Outstanding Achievement in October. Caulk is the superintendent of Portland Public Schools in Portland, Maine, serving 7,000 students PK-12 and over 4,000 adults in the Portland Adult Education program. Previously, he served as the assistant superintendent with the school district of Philadelphia.

Jeanine Moore, HR ’91 and Tim Dalby, ETE ’99 M ’11, were Delaware’s recipients of the Presidential Award for Excellence in Mathematics and Science Teaching.

Angela Seguin, MEd ’92, program coordinator for Student Wellness and Health Promotion was presented by UD’s E. Arthur Trabant Award for Women’s Equity, in May 2014. She was cited for her tireless and passionate work to ensure that UD’s campus is safe and equitable, particularly for survivors of gender-based violence.

Eileen Donahue Brittain, ’88 EH/M, of Houghton, N.Y., has retired from full-time teaching after a 42-year career working with young children and their families, most recently as associate professor of early childhood education at Jamestown Community College.

Lolita Lopez, HS ’76, 2014, President and CEO at Westside Family Healthcare in Delaware, was inducted into the National Association of Community Health Centers Grassroots Hall of Fame.  She was also presented with the Delaware Assoc. for Public Administration’s Public Service Award in December 2013.

Paula Humphrey Maniscalco, HE ’77, joined Artisans’ Bank’s Residential Lending Division as Vice President and Residential Mortgage Lender. She previously served as mortgage banker at JPMorgan Chase in Wilmington. Paula’s son, Andrew, is a current UD student who will graduate after only 3 1/2 years with a degree in mechanical engineering and a math minor in fall 2014.

Joseph Moglia, M.Ed. ’74, is the chairman of the board at TD Ameritrade and head football coach and chair of athletics at Coastal Carolina University. Over the last eight seasons, Moglia has been part of six championship teams and was twice named a finalist for National Coach of the Year.

Ann M. Palmer, ’76, is President and CEO of the Arthritis Foundation and was elected to the board of directors of the National Health Council.

William Moody, UD faculty member passed away Oct. 22, 2014. Bill was a professor of Math and Education at UD for 41 years, where he worked with area schools in the preparation of elementary and middle grades teachers. He created and ran the Delaware Math League and the Solvelt math summer program for international youth. He spent many years in Newark, DE and Ocean Pines, Ocean City, MD, before recently moving to Gainesville, GA. He is survived by his wife, Mary Golden Moody; his children; his daughters-in-law Debra and Beverly; six grandchildren and two great-grandchildren.

(Please note, majors have changed over the years. Degrees are now referred to by their current listing, whenever there is an applicable equivalent.)