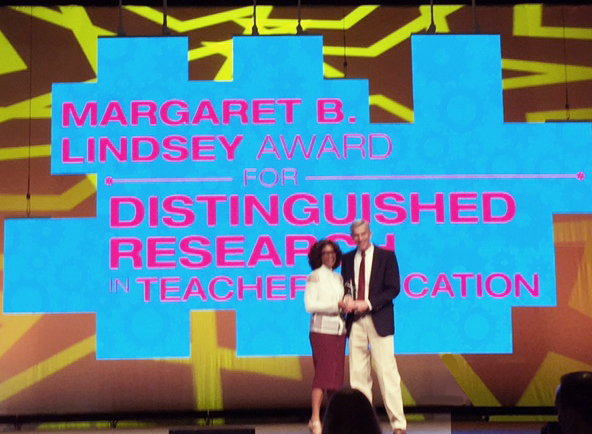 Kauffman-Hallahan-Pullen Distinguished Researcher Award – Nancy C. Jordan, Dean Family Endowed Chair of Teacher Education in the School of Education, has been named the 2020 Kauffman-Hallahan-Pullen Distinguished Researcher by the CEC Division for Research. This award recognizes individuals or research teams whose research has resulted in more effective services or education for exceptional individuals.

Partnership for Public Education Fellowship – Ann Aviles has qualified for a PPE fellowship based on her partnership proposal with Yes, You Can!

Top 100 Edu-Scholar Public Influence Rankings – CEHD dean Gary T. Henry has been named to the American Enterprise Institute’s (AEI) Top 200 Edu-Scholar Public Influence Rankings. He is ranked 81st in the nation—recognized for his extensive contributions to education research and his continued success introducing research findings into the national conversation.

Dean Family Endowed Professorship for Teacher Education – Nancy C. Jordan has become the first faculty member appointed to this endowed professorship, which was established through a charitable trust created for the purpose of attracting and retaining an outstanding educator and scholar.

Excellence in Teaching Award – William Lewis and Rob Palkovitz received this award from the University of Delaware which honors outstanding faculty members who demonstrate true excellence in teaching.

Faculty Excellence in Scholarly Community Engagement Award – Roberta Golinkoff received this award from the University of Delaware, which is given to a faculty member who has displayed excellence in mutually beneficial, scholarly engaged teaching, research or creative activities and/or service.

Mid-Career Faculty Excellence in Scholarship Award – Elizabeth Farley Ripple received this award from the University of Delaware. This award highlights UD’s commitment to excellence in research, scholarship and creative endeavors.

Psychology and AIDS Distinguished Leadership Award – Valerie Earnshaw received this award from the American Psychological Association, which recognizes individuals who have demonstrated outstanding effort and leadership in the conduct, dissemination and translation of high-quality research in the areas of HIV/AIDS prevention, treatment/care and/or policy.

CEHD Dean’s Research Award –  Steve Amendum (SOE) and Mellissa Gordon (HDFS) received the CEHD Research Award, given to an assistant/associate professor with a strong program of research, received external funding, published in high-quality journals and/or published a book with a leading academic press.

Linking Research to Practice Outstanding Publication Award – Amanda Jansen, professor in the University of Delaware School of Education, was recognized by the National Council of Teachers of Mathematics for her article, “Rough Draft Talk in Mathematics Classrooms,” co-written with three Delaware teachers and published in the 2016-17 volume of Mathematics Teaching in Middle School.

UD’s Excellence in Undergraduate Academic Advising Award – Elizabeth Pemberton, professor in Education was selected to receive this award on May 7, 2018. Nominations are submitted by students, alumni, faculty, and staff to recognize dedication to our students’ success.

CEHD Dean’s Research Award – Joshua Wilson, assistant professor in the School of Education, was recognized by Dean Vukelich for his research incorporating computer software in the classroom designed to evaluate and improve student writing.

Lifetime Achievement Award – George Bear, professor, school psychology, was recognized in 2017 by National Association of School Psychologists  for his contributions to research and practice in school psychology, and leadership in the profession.

Fulbright Scholar – Allison Karyn, associate director CRESP, has been selected as a 2016-2017 Fulbright Scholar by the J. William Fulbright Foreign Scholarship Board  to measure and address food insecurity in the Bahamas.

AERA Fellow – Jinfa Cai, professor of mathematical sciences with a joint appointment in the School of Education was named a 2016 fellow of the American Educational Research Association.

Torch Award – Barbara Settles, HDFS professor, was recognized in 2015 for her decades-long effort to ensure women’s equality at UD.

Leadership Award – Steven Eidelman received the 2015 AAIDD leadership award for his work advancing the services used by people with disabilities. 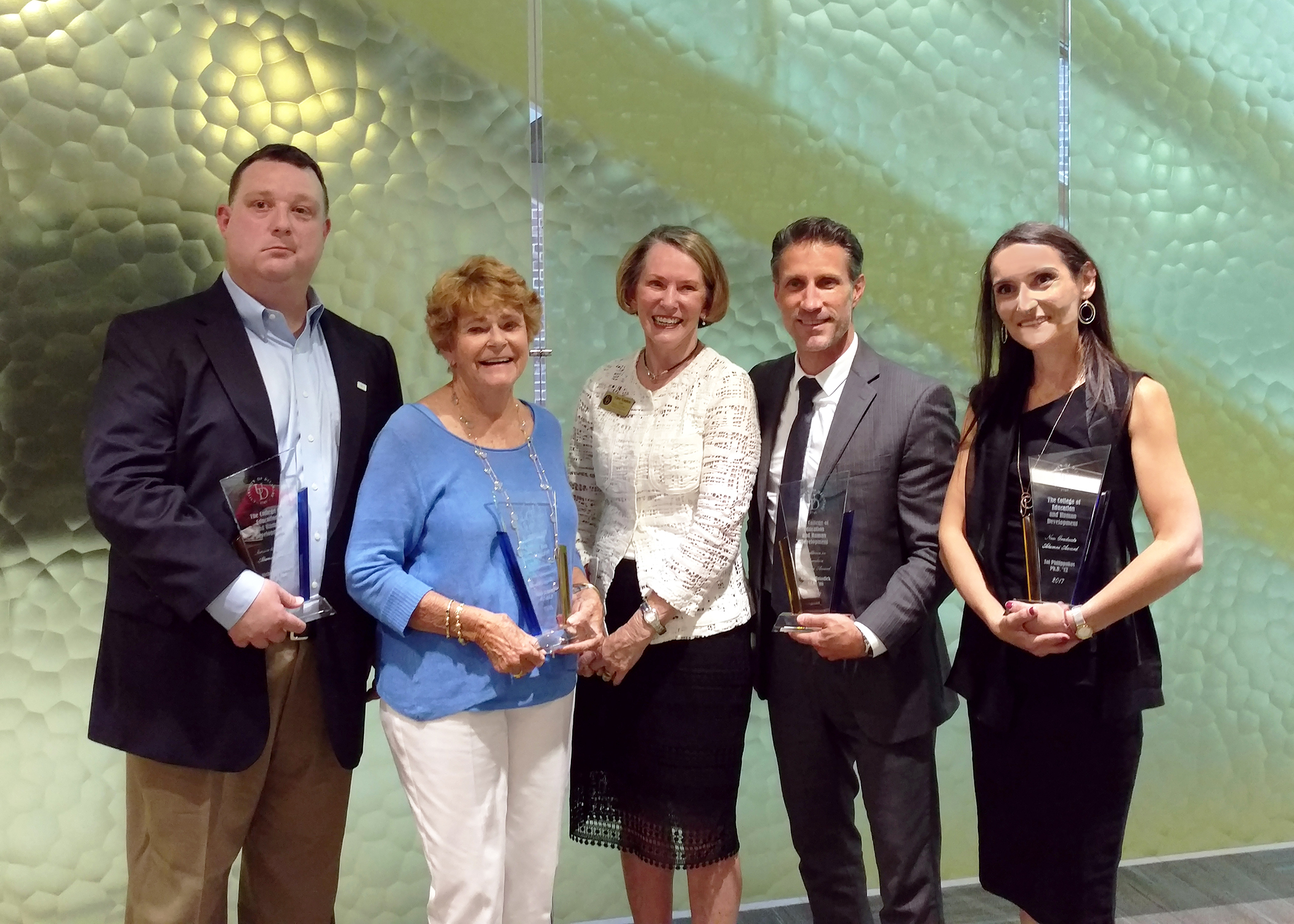 CEHD Alumni Awards – On June 7, 2019, CEHD recognized three alumni for their contributions to the fields of education and social services. Recipients were:

State Teachers of the Year – Three alumni and one graduate student from the University of Delaware’s College of Education and Human Development have been named as finalists for the 2020 State Teacher of the Year Award: Rebecca Vitelli (ETE ’14, MEd ’16) Colwyck Center, Colonial District, Brennan Clarke (current MA student) Shields Elementary, Cape Henlopen District, Stephen Landry (HS ’06) Appoquinimink High School, Appoquinimink District, Erica Richard (MEd ’17) East Dover Elementary, Capital District. On October 15, 2019, Rebecca Vitelli was named Teacher of the Year. She is Delaware’s nominee for National Teacher of the Year, a title she hopes will allow her to share her message about the importance of all children having access to quality early childhood education.

CEHD Alumni Awards – On June 1, CEHD recognized four alumni for their contributions to the fields of education and social services. Recipients were:

Outstanding Dissertation Award – Alison Hooper, HDFS M ’13, PhD ’17, was recognized by the Early Education and Child Development Executive Board and the SIG’s Dissertation Award Committee for her high quality dissertation research and writing in the field of early childhood.

Leader to Learn From – Emmanuel Caulk, M.I.,’02, superintendent of Fayette County Public School District in Kentucky, was selected by Education Week as a Leader to Learn From. Caulk has spearheaded the implementation of  a successful improvement plan,  focused heavily on fostering broad community support and addressing the needs of students who struggle the most.

CEHD Alumni Awards – On June 2, CEHD recognized four alumni for their contributions to the fields of education and social services. Recipients were:

Presidential Awards for Excellence in Mathematics and Science Teaching – the nation’s highest honor for math and science teachers was awarded to 3-time UD alumnus John Scali, an integrated science teacher at MOT Charter High School in Middletown, Delaware, and Kristin Gray, ETE ’96, a mathematics specialist at Richard A. Shields Elementary School in Lewes.

Bessie B. Collins Award – Christy Mannering, HS ’15, was recognized as a UD Woman of Promise, presented to female adult student who is continuing her education, has overcome difficulties, excelled in scholarship, and is giving back to her community.

Grosvenor Teacher Fellow was bestowed upon Teagan Thomas, ETE ’13, by the National Geographic Society. The award allowed Thomas, a 6th grade science teacher at Las Americas ASPIRA Academy, to travel to the Arctic Sea to research wildlife and climate, develop activities for use in her classroom.

Delaware School Psychologist of the Year – Gabi Koury, M’12, a school psychologist in the Red Clay Consolidated School District, was recognized by the Delaware Association of School Psychologists for her commitment to student diversity, community collaboration, demonstrated leadership, and the development of her students’ academic and social skills.

Our programs are nationally accredited by:

The University of Delaware provides a list of all accreditations received by the university.

“I don’t see the College of Education and Human Development as my school, I see it as my family. The academic family I have that believes in children and making a difference.  I am privileged to be a graduate of UD.”