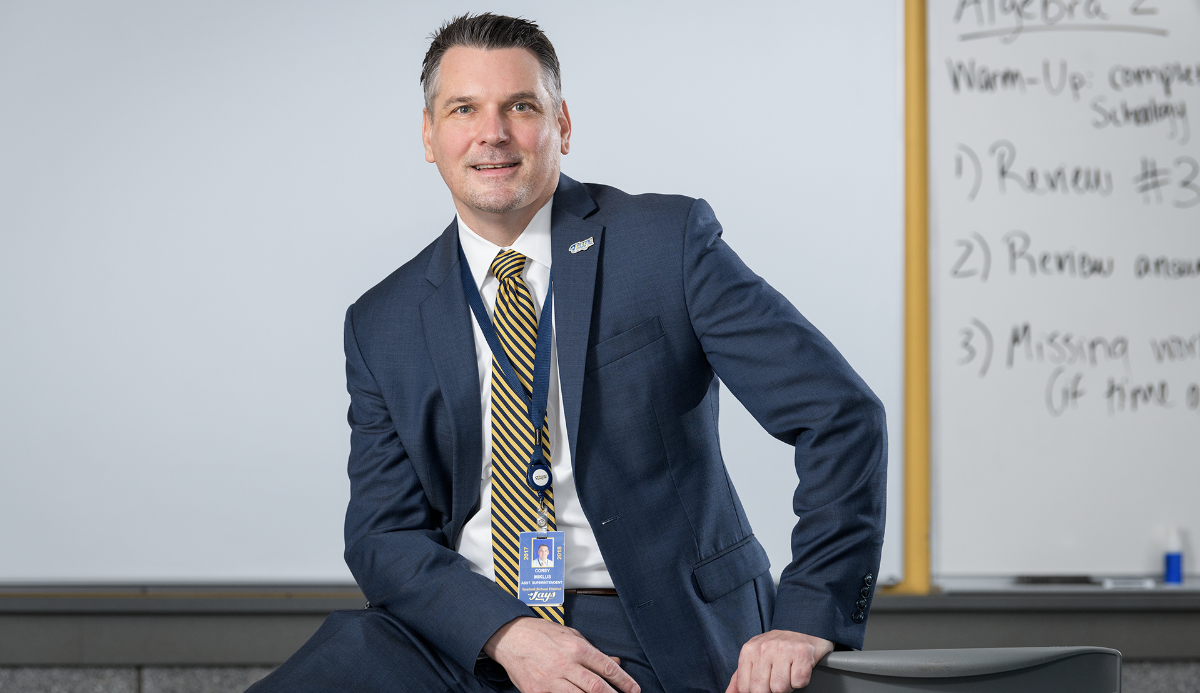 As Superintendent of the Seaford School District, Corey Miklus is a champion of education equity

Not that long ago, Seaford School District was in an academic tailspin. Located on Delaware’s rural southwestern border with Maryland, the district was home to some of the lowest-performing schools in the state. In 2014, Seaford ranked last in English Language Arts (ELA) and Math, according to assessments by the Delaware Department of Education, and all four of the district’s elementary schools were in need of turnarounds.

In other words, University of Delaware alumni Corey Miklus, EHD14EdD, had his work cut out when he started as the district’s Director of Instruction in 2015. In the five years since, during which he has climbed the ranks to Superintendent, Seaford School District has thrived and become one of Delaware’s most promising school turnaround success stories.

With the help of a new elementary reading and writing curriculum designed by faculty in UD’s School of Education, student ELA scores have improved significantly. Math scores are up as well, and two of the district’s four elementary schools have since been named National Blue Ribbon Schools by the U.S. Department of Education for closing the achievement gap.

“We’ve steadily climbed since 2015, going from one of the worst-performing districts to being recognized by the federal government because our schools have had exceptional results,” said Miklus, adding that the district has received other state and national awards and is also home to the 2019 Teacher of the Year.

When Miklus joined the Seaford School District in 2015, the elementary schools were in decline. At one of those schools, Frederick Douglass Elementary, test scores and attendance were in the bottom-five statewide, while suspensions were among the highest. Buildings were in need of repairs.

Seaford needed a turnaround, and as the Director of Instruction, Miklus was focused on rethinking the district’s curriculum for English Language Arts.

A lifelong educator, Miklus had contributed to these kinds of initiatives in the past, sometimes in partnership with research faculty in the College of Education and Human Development. When he needed help brainstorming solutions to Seaford’s ELA curriculum, he turned to a longtime friend, Sharon Walpole, professor in the School of Education and director of UD’s Professional Development Center for Educators.

“She’s always been a really good thought partner for me,” Miklus said. “So we bounced ideas off each other and that’s really when we got into Bookworms.”

Bookworms is an open-access literacy curriculum for kindergarten through grade 5 that emphasizes shared reading activities using “real books,” as Walpole likes to say, instead of anthologies sold by commercial publishers. Classrooms have their own libraries of age-appropriate books, which students can bring home.

“Bookworms was one of the main changes we made for ELA curriculum at our elementary schools, and we’ve done a lot of professional development with the University of Delaware and Dr. Walpole’s team,” Miklus said.

More than 40,000 students in 11 states now use the Bookworms curriculum, and the results have been encouraging, especially in Seaford. According to a 2019 case study of the Bookworms implementation in Seaford conducted by UD’s Center for Research in Education and Social Policy, ELA achievement for Seaford’s third graders was 37 points lower than the state average in 2015. By the time those students reached fifth grade in 2017, they outperformed the state average and the district’s Frederick Douglass Elementary School improved more than any other school in the state.

“The interesting thing for me about Corey is that he is able to take the long view,” said Walpole. “He had a vision for where he wanted instruction to go in the elementary schools, but he knew that he had to gain buy-in by pacing himself. His decisions as a leader allowed teachers to accept a radically new curriculum, become experts at it, and change achievement for all students.”0

And an adaptable leadership style certainly helped weather the storms of the past year.

On March 13, 2020, just as Seaford was starting to show sustained progress, Delaware schools were shuttered because of the pandemic. Students were sent home with no clear plan for when or even how they would ever return.

Just months into his tenure as superintendent of Seaford School District, when the coronavirus pandemic prompted Delaware to close schools, Miklus worried that some students would fall off the grid–literally.

“We’re a high poverty district, but we’ve really made technology a priority,” said Miklus, adding that Seaford had been chipping away at purchasing more laptops over the past five years. “We were pretty good with devices, but our number one issue was internet connectivity for our families.”

Seaford faces problems that are common to rural districts. Students come from low-income communities, where adults work long hours at physically demanding jobs. Seaford is surrounded by corn fields and poultry farms, which became super spreader sites in the early months of the pandemic. It is not uncommon, Miklus suggested, for students to live out of reach of cell towers and other digital infrastructure.

“Our families couldn’t get the internet,” said Miklus. Initially, plans to get internet access to every student kept running into delays because the infrastructure just wasn’t there. “Some houses literally could not get internet because they are too far out in the woods.”

Other houses closer to the grid required expensive installation packages that neither the district nor their families could afford. Still more families lacked basic knowledge about computers and did not know how to connect to the internet.

“Spring was tough for our families,” said Miklus, who was also concerned about the mental and physical toll of students spending so long away from school, especially for families who depended on the district to provide two meals a day.

“Our kitchen never closed,” said Miklus. “Even during the height of the pandemic, our food nutrition team never stopped working. They were there making sure that the meals were getting out in the community, even when the cases just were really sky high. We’re putting ourselves at risk, but our families need it, and that’s important to us.”

Despite these challenges, Seaford became the first public school district in Delaware to reopen for hybrid instruction on September 8, 2020. Schools are running at close to 50 percent capacity with students on rotating schedules. After extensive planning with the state, by the end of November the district was finally able to secure 1,000 mobile hotspots from Verizon and AT&T for its students. The district has even held “boot camps” for families that had never owned a computer or accessed the internet, which included many of the district’s Spanish-speaking households.

“One thing that makes me proud about Seaford is that we fight for every single student and family,” said Miklius. “We fight to highlight the equity issues that we face on the western side of the state. And it’s important that we fight for our community and meet the basic needs of all our families.”