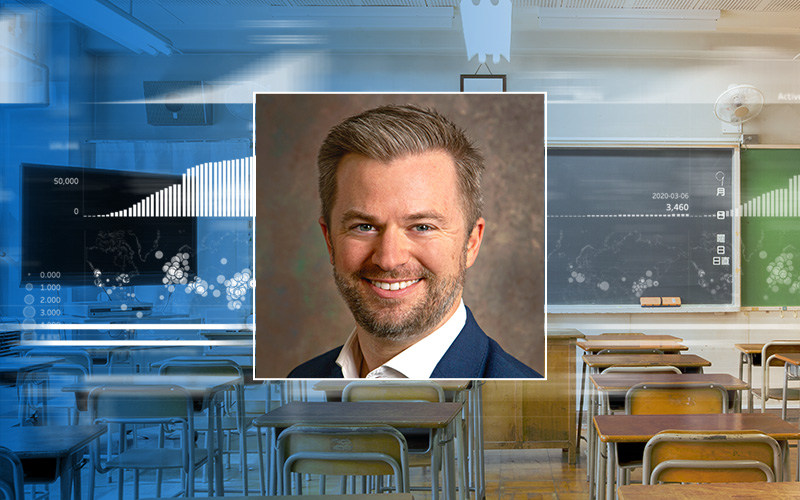 Assistant principals and principals are integral members of our schools, from kindergarten through 12th grade. Among their many roles, these educational leaders develop academic policies, liaise with district and state officials, support their school’s teachers and staff and foster relationships with students and parents. Research has often shown that effective principal leadership is associated with improved student achievement and school outcomes, such as a positive school climate and teacher retention.

While the importance of assistant principals and principals is clear, the path to effective educational leadership is less so. While nearly all principals complete a preparation program that leads to licensure, many of these school leaders do not receive consistent professional development or mentoring within the first three years of their principalship.

Bryan VanGronigen, assistant professor in the University of Delaware’s School of Education (SOE), and co-author Laura K. Rogers of the University of Utah, address gaps in the preparation of early career principals (ECP) in “Beyond Preparation: State Approaches to Early Career Principal Induction,” published in the journal Leadership and Policy in Schools.

“It’s critically important to develop a better understanding of how leadership and management can be fostered in all kinds of educators, from first-year teachers to experienced instructional coaches,” VanGronigen said. “We chose to focus this research on ECP induction because it’s an understudied part of the larger educational leader pipeline — and how principals are supported in their formative years can influence whether they remain in the job or the profession. Other research, including work from my colleague Lauren Bailes, assistant professor in the SOE, has found that principals ‘reset’ some of their expertise — especially with regard to hiring and retaining teachers — when they move schools, which happens about every four years. Instead of starting over every few years, ECP induction supports can help create conditions so that fewer schools ‘reset’ and instead actually make real progress with student learning.”

Recognizing that induction — which is composed of activities like mentoring, coaching and professional learning — is an essential form of preparation, VanGronigen and Rogers determined the extent to which U.S. states facilitate such support for ECPs. They found that only about half of states require any form of principal induction and that most states varied widely in their approaches to ECP support.

As VanGronigen and Rogers discuss, induction activities that occur during the first three years of a principal’s tenure can serve significantly to influence a principal’s effectiveness and support retention.

Professional development and key socialization activities, such as coaching, mentoring and networking with experienced leaders, can help ECPs build key leadership competencies, cope with job stress, gain policy knowledge, lengthen their tenure in a school and deepen their professional networks.

Nathalie Princilus, supervisor of unique programs in Christina School District, participated in a new induction program offered through the UD partnership with the Delaware Department of Education, the Office of the Governor and Delaware districts and public schools. She was one of 12 participating fellows.

“It has been an absolute honor to learn alongside such great leaders from across the state,” said Princilus. “Throughout the course of the Governor’s Institute for School Leadership (GISL), a yearlong fellowship program, we gained so much from each other as we examined our data and researched courses of actions to improve equitable access in learning environments. The roles and responsibilities of school administration can be overwhelming as we make daily decisions, which can have tremendous impact on student outcomes. I am fortunate to have gained 12 critical thought-partners in this work.”

Holly Langley, assistant principal at Sussex Technical High School, shared a similar experience after participating in her district’s induction program and in GISL.

“During my first year as an assistant principal, I was assigned a mentor. We were also required to attend monthly meetings as part of the induction process. I gained knowledge, skills and a network of novice administrators, which made me want to continue into the optional ‘year two’ induction program. During this year, I was assigned an additional mentor (a former administrator) and a coach (a director of education at an institute for higher education),” said Langley.

The benefits Langley gained from her previous induction programs motivated her to apply for a third year of training through GISL. “This learning community has been a great resource for me as I prepare for the principalship!” said Langley.

Though many states recognized the importance of induction, VanGronigen and Rogers found that less than half of them required this kind of ECP support. Among 50 states and the District of Columbia, only 23 (45%) required some kind of ECP induction experience, while 28 (55%) did not. Of the 23 states requiring ECP induction, only 10 linked induction participation to principal licensure requirements.

VanGronigen and Rogers also found that states varied considerably in terms of how they provided induction experiences. They identified seven different providers of ECP supports: a state department of education, a district, a school, a district organization, a higher education institution, a state level professional association (such an elementary principals association) or another external provider.

As VanGronigen and Rogers suggest, now is the time for states to take a more active role in ECP induction. Passed in 2015, ESSA opened the door for an increased state role in developing ECPs. This act authorizes the use of Title II funds for increased state attention to professional development for school leaders. So far, at least 21 states have responded with plans to support ECPs through induction activities, though these plans vary greatly from state to state. According to their findings, Delaware requires both ECP support and early career teacher support.

“It’s important for states to take a systems view of educational leadership development and support because of the considerable turnover in many schools,” said VanGronigen. “Some schools—especially those that need really good principals—might end up in a state of perpetual reset, going from one principal to the next every two or three years. ECP induction supports hold promise to mitigate the negative influences of these resets so schools can make real progress in fostering high-quality student learning. Now, some states lack the authority or the ability to do much, but their state departments of education can still use their platforms to raise awareness and move the conversation forward by prompting questions like, ‘How do we generate interest in the principalship? How can we create supports for principals to succeed? How can we plan for principal turnover so that our state has a consistent pool of highly-qualified candidates?’ These questions can prompt thinking that could lead to very important policy actions.”

UD offers many forms of preparation for educators interested in educational leadership or principal preparation.

Housed within the SOE, the Ed.D. program in Educational Leadership equips students with the knowledge, skills and tools to gather and use information in decision-making and problem-solving related to organizational improvement within schools, districts and other educational contexts.

Housed within the College of Education and Human Development, the Delaware Academy of School Leadership (DASL) offers a principal preparation program that leads to assistant principal or principal certification in Delaware.

In partnership with the Delaware Department of Education, the Office of the Governor and Delaware districts and public schools, DASL also offers the Governor’s Institute for School Leadership (GISL). Launched in January 2021, this initiative provides professional learning for superintendents and induction for experienced assistant principals.