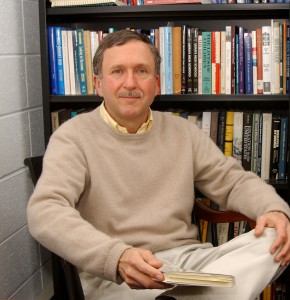 Robert L. Hampel, professor, history of education, is crafting a book that will provide an  historical overview of education in the United States. Titled Fast, Fun, Easy, Cheap and Useful: A History of Shortcuts in and around American Education this book is designed for audiences beyond fellow historians of education, to caution readers yearning for quick and easy ways to learn. If it sounds too good to be true, it probably is.

Dr. Hampel shared the impetus for his latest endeavor.

On stage, comedian Don Novello appeared as Guido Sarducci, inventor of the five-minute university. He knew how to simplify the curriculum. “In five minutes you learn what the average college graduate remembers five years after he or she is out of school.”

Everything likely to be forgotten is dropped. Two years of college Spanish becomes como esta usted and muy bien. “Economics? Supply and demand. That’s it! Business? You buy something and you sell it for more. Theology? What you have to learn in theology is the answer to the question, Where is God?”

Not only is the five-minute university fast, it is also fun—twenty seconds under a sun lamp in place of a trip to Fort Lauderdale—and very cheap—just twenty dollars “and that’s tuition, cap and gown rental, graduation pictures, snacks, everything, everything included.”

Fast, fun, easy and cheap: what more should a shortcut offer? Novello could have described how the five-minute graduates would get ahead: higher salaries, big promotions, new careers.

Without the right credentials all of those tangible rewards might be elusive. Other benefits would go beyond the checkbook to include the personal—better self-esteem, greater confidence—and the interpersonal—social finesse, more friends, and whatever else a good comedian could imagine and describe. After all, the subtitle for How You Too Can Develop a Razor-Sharp Mind and a Steel-Trap Memory promised longevity and better sex.[1]

Slow, hard, joyless, expensive, and useless: who wants to endure that? The flip side of education without tears is the possibility that school can be brutal, “a long, unglamorous, even demeaning process—a nurturing never natural to the person one was before one entered a classroom,” as Richard Rodriquez put it.[2]

A History of Shortcuts

This book focuses on four types of shortcuts—streamlined paths to:

These were selected them because they appeared so often as our current educational system took its enduring shape by the early 20th century. Their advocates dissented from the emerging consensus that longer-is-better: did all students have to be on campus for so many years? Why not create a less rigid world where the pursuit of self-improvement could happen on the students’ terms rather than endure a uniform schedule imposed by fiat?

A teacher might be inept or aloof; the textbooks, dull or difficult. Even with talented instructors and the liveliest materials, most students will stumble. They will fail on many first tries and thus need the grit to try again and again. They will have to unlearn their naïve preconceptions of gravity, fractions, and many other topics, an uprooting that can be harder than learning new ideas and methods. If they succeed, close ties with less educated friends and family might fray or snap. If they succeed so well that they want to spend their lives as scholars, they face five or more years of graduate school apprenticeship without any assurance of a tenure-track job.

It is thus not surprising that many people want education to be less onerous. If not easy, then easier. If not fast, then faster. Too fast and too easy might be fraudulent or absurd—a five minute university!—but faster and easier can signal ingenuity, efficiency and intelligence rather than deceit, sloth or naivety.

If education is an investment, then getting it for a good price is a logical strategy. Most people calculate the value of education and then decide what they will pay for it in terms of time, effort, pain, and cash. Investment? Calculate? An economist might offer a formula or two at this point, quantifying the inputs and outputs to see who invested what and if those bets paid off. As an historian, I turn to the past to see which shortcuts abounded, why they arose when they did, how they were justified, and the reactions they evoked.

The central argument in this book: For Americans to take the fast lane, they needed to be swayed by promises of ease, fun, usefulness and affordability. Speed alone was rarely a strong enough incentive. Shortcuts to culture and vocational skills (the topics of the first two chapters) flourished because their proponents offered so many benefits. In contrast, far fewer people tried to save time when it required an intellectual sprint. The long term gains could be substantial, but as we will see in chapters three and four, strenuous acceleration aroused less interest than its proponents expected.

No pain, no gain is a slogan relevant outside the gym!

Robert Hampel’s previous research included a book on the history of high schools (The Last Little Citadel), a coauthored book on students’ views of school improvement initiatives (Kids and School Reform) and, most recently, an edited volume, Paul Diederich and the Progressive American High School.

Fast, Fun, Easy, Cheap and Useful: A History of Shortcuts in and around American Education is expected to be completed in 2016.