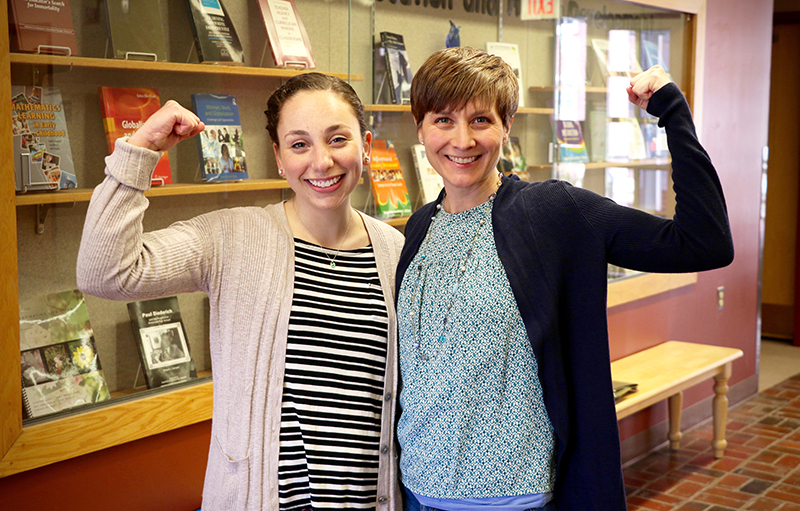 Recent findings by the Pew Research Center indicate that while women have made advances in workforce participation over the last half century, large gender gaps remain at the top levels of leadership in business and government.

In addition, the American Association of University Women (AAUW) found in 2009, that women one year out of college who were working full time were paid, on average, just 82 percent of what their male peers were paid. Those lost potential earnings add up over a lifetime.

To help mitigate these inequities, the University of Delaware launched the AAUW resident student organization to empower UD women and help advance their future economic prospects.

“AAUW at UD creates a space for people to come together over their passion for women’s empowerment,” said Gillian Williams, AAUW club president and sophomore public policy major.  “Members will gain mentorship, support and opportunities that will shape them into future leaders and change makers.”

AAUW nationally is a leading voice promoting equity and education for women and girls. Since its founding in 1881, AAUW has advanced its mission through advocacy, education, philanthropy and research.  It boasts over 1,000 branches across the country in addition to its presence on university campuses. In addition to trainings and workshops, they offer several grant and fellowship awards for graduate students and host the National Conference for College Women Student Leaders.

While a chapter of the national organization has existed in Newark for many years, there was not an active campus chapter until now. The Newark group has played a key role in restarting the UD group, and it is hoped that the revival of the UD club may result in renewed growth of the local chapter by encouraging UD faculty and staff to get involved.

Opportunities for trainings, networking, and peer support inspired UD undergraduate and graduate students to push for the creation of the AAUW at UD. The RSO came about as a result of collaborative efforts between leaders of the local Newark AAUW chapter and a group of undergraduate students with the Blue Hen Leadership program. The faculty advisor is Martha Buell, professor, Human Development and Family Sciences (HDFS) and director of the Delaware Institute of Excellence in Early Childhood (DIEEC).

Laura Cutler, a doctoral student in HDFS and member of the local group, nurtured the connection and has helped facilitate coordination of planning and goal-setting. “I believe that this RSO will create an opportunity for the UD community to learn more about the inequities facing women and girls – everything from equal pay to women’s rights to how to succeed in traditionally male-dominated fields,” said Cutler. “Each of these issues is important not only for undergraduate and graduate students to be aware of, but for the whole UD community.  It is through knowledge that advocacy and change happen.”

AAUW at UD held a kickoff event on March 6 with over 25 attendees and six faculty presenters who described their experiences navigating obstacles and challenges in pursuit of their professions – and expressed their commitment to the importance of women supporting other women.

Sabrin Beg, assistant professor of Economics, shared one of her favorite quotes – by Madeleine Albright: “There is a special place in hell for women who do not help other women.”

Going forward, AAUW at UD will focus on continuing to support the mission of AAUW on campus and in the local community. A Fempowerment workshop, set for April 10, will promote Equal Pay Day. And in addition to planning a fundraiser to support both the Newark branch and the national organization, the club hopes to bring Start Smart, AAUW’s salary negotiations workshop, to campus in the near future.

AAUW at UD is open to all undergraduate and graduate students at UD – regardless of sex. To learn more, find the group on Facebook at @AAUWatUD or via email at aauwatUD@gmail.com.