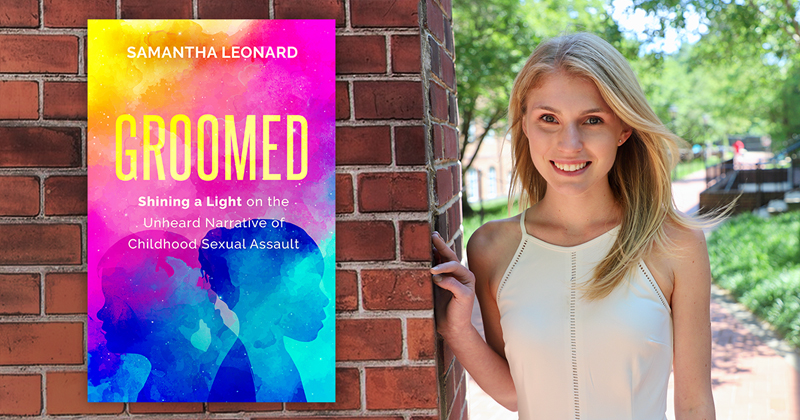 As a survivor of childhood sexual assault, University of Delaware alumna Samantha Leonard knows that sexual predators are methodical about targeting and manipulating their victims. The process is known as “grooming,” and it can last for months or years before the first instance of sexual assault occurs. Leonard experienced the grooming process when she was just eleven and twelve years old, and like many childhood victims had no idea she was trapped in an abusive relationship. As Leonard grew older and realized what had happened, she struggled to cope. “I didn’t have hope for the future,” said Leonard. “I felt like no one else had ever been through what I had just been through. How could I possibly move on?” During her time at UD, Leonard found the courage to speak out. While pursuing a degree in human services with a minor in psychology, Leonard began to research childhood sexual assault. She also volunteered as a crisis advocate with the Sexual Offense Support (S.O.S.) network at UD, which provides guidance and resources for individuals who’ve experienced sexual assault. Finding a community of survivors proved life-changing. “S.O.S. really empowered me to feel like I had the right to share my experiences and to feel the way I was feeling,” said Leonard. “Learning how to provide that support for others helped me be able to be more self-compassionate. Being able to come together with other survivors, and seeing the commonalities among our experiences, gave me hope for the future.” In an effort to raise awareness about the tactics sexual predators use to isolate and abuse their victims, Leonard chronicled the process in her new book, Groomed: Shining a Light on the Unheard Narrative of Childhood Sexual Assault, now available in ebook and paperback. In it, Leonard uses fictional depictions based on true stories of sexual assault survivors to help illustrate the six steps to the grooming process. She hopes that her book will allow people to recognize the warning signs and take action to protect children in vulnerable situations. “I was very much on a search for justice when I started the book, and I think along the journey the book really turned into me wanting to help people empathize with survivors and to react in a more compassionate and trauma-informed way,” said Leonard. Leonard graduated in the spring and was the 2019 recipient of the Catherine Bieber Scholarship for Academic Achievement and Leadership in Human Development and Family Studies. She is currently pursuing a graduate degree in social work and hopes to one day work in a rape recovery center. “It is my way of making meaning out of tragedy,” she said. “It’s a long road to sexual assault,” said Leonard. “That’s why I wanted to write this book: to describe the stages of the grooming process and educate parents about the steps they can take to prevent sexual assault before it happens.”

What do parents and guardians need to know?