Leaving home to attend college can be difficult for most students, but freshman Dominique Ceretti took this a step further. She enrolled in UD’s World Scholars Program, which allows incoming freshman to study abroad for their first semester of college.

World Scholars Program is an innovative program for selected, high-achieving undergraduate students wishing to become educated as global citizens. Throughout their time at UD, students will participate in multiple study abroad programs, engage in coursework, research or internships that build intercultural understanding and reside in an international living-learning community. 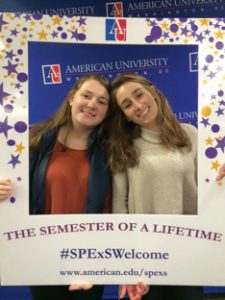 “I had never heard of a program quite like World Scholars, and I was attracted to the idea of having such an enriching and untraditional first semester.”

Maddie Clark, another incoming ETE major, participated in a different first-semester opportunity. She enrolled in the newly-created Delaware in D.C. program.

In the fall of 2015, fifty students began their studies at American University, while serving an internship in D.C. Then in the spring, they enrolled in classes in Delaware, where they will finish their degree.

“I chose to participate in the D.C. program because I felt like it would be an awesome experience because it allowed me to have real world experience during my freshman year,” said Clark.

Both World Scholars and Delaware in DC offer smaller class sizes for freshmen, which provides two advantages—the students form a tightly knit community and they find it easier to transition into the college environment.

While the coursework was rigorous, Ceretti pointed out, “One great thing about the university where I studied was that there were no classes on Fridays, which meant that I could spend the day exploring Rome, traveling outside the city, or getting ahead on schoolwork.”

This helped foster important time management skills. “While I might have enjoyed doing even more traveling, I was always careful to maintain a balance between my schoolwork and my adventures,” said Ceretti.

Clark had a similar concern—juggling her coursework and internship in our nation’s capitol. Finding an internship can be both exciting and stressful for any college students, let alone an incoming freshmen. But Clark obtained a position at a local elementary school fairly easily. And it wound up changing her career path.

Working with students who did not speak English as a first language was a challenging but exciting experience for Clark. She was able to teach students whose parents worked at the nearby embassy and this experience has helped to shape her future aspirations as an educator.

Both students agreed that UD’s programs provided invaluable depth and breadth to their academic and professional career.

“I learned how to lead small groups, as well as how to create lesson plans. This will help me succeed in my future education and professional endeavors because it gave a lot of experience in my educational field of interest,” said Clark.

Ceretti added, “I’m sure to find myself outside of my comfort zone at various points during my time at UD and especially in my role as an educator. My experience in Rome has helped to prepare . My confidence and sense of independence have been strengthened by studying and living abroad, and I have gained valuable insight into people from other cultures who sometimes possess alternative views about the world.”

The World Scholar program has been expanded for 2016, offering partnerships in Rome, Italy and Madrid, Spain. To learn more about UD students’ experiences, visit #UDWorldScholar.

Article by Will Miller