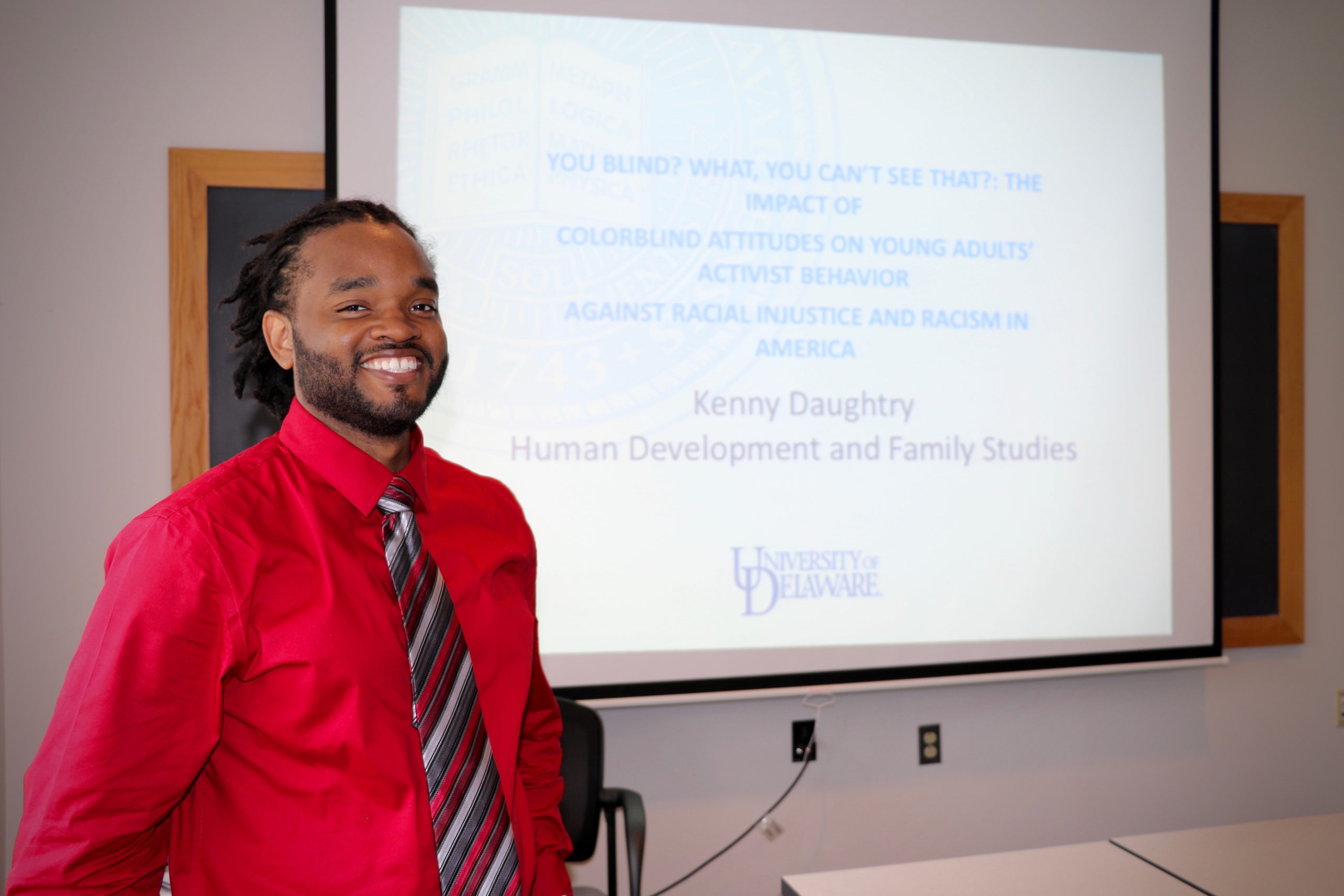 Doctoral student Kendell Daughtry will discuss how to dismantle racism at the Race and Culture lecture series on Tuesday February 18, 2020 at 3:00 p.m.

Have you ever heard a well-meaning person say “I don’t see skin color” and wondered if that person sees you? Is it just an empty phrase filled with good intentions? Or does using this phrase support systemic oppression?

The notion of colorblindness may sound good in theory, like some kind of unifying idea for a post-racial America. In reality, however, attitudes like this perpetuate racism, according to research by Kendell Daughtry, who is completing his doctoral studies in the Department of Human Development and Family Sciences (HDFS) at the University of Delaware.

“Colorblind attitudes give people the idea that race doesn’t matter—that race is not a factor in education, jobs or the justice system,” said Daughtry. “Because if people can’t ‘see skin color,’ then they won’t see that there is discrimination because of skin color.”

In a study published last year in the Journal of African American Studies, Daughtry surveyed 222 people between the ages of 18 and 35 to learn more about how individuals self-identify with their own ethnic group—i.e., do they “see color”—and how this decision affects attitudes toward racial injustice. Coauthored with HDFS faculty Valerie Earnshaw, Robin Palkovitz and Bahira Trask, the study asked participants approximately forty questions, and the pool of respondents was narrowed to only those who had completed at least six years of schooling in the United States.

The results were illuminating.

Daughtry discovered a positive correlation between colorblindness and a form of racism known as “social dominance orientation,” which is a measure widely used by social scientists to determine a person’s preference for social hierarchies. The less support a person exhibits for group equality, the stronger that person’s social dominance orientation.

“So if I’m adhering to this colorblind attitude—even unknowingly—then I am allowing racism to continue because I don’t see color,” said Daughtry.

Conversely, participants who scored low in colorblindness were more likely to exhibit activist behaviors that raise awareness of issues related to racial and social justice.

In other words, when someone believes that skin color does not play a role in such things as racial privilege or institutional discrimination, then that person is less likely to engage in activities that promote racial justice, such as protests and other forms of activism.

“If people are not active in the fight against racism then they could be considered part of the problem, for inactivity allows for racism to continue,” said Daughtry. “Activism is not displayed in any exclusive manner. It is essential for people to find which mode of activism they are willing to engage in and do it.”

“Kenny is an astounding thinker, an impactful teacher, passionate speaker, and an effective equity-minded and justice-oriented scholar activist,” said Carey. “I’m sure that whatever emerges from his study will be insightful and field-bending.”

Daughtry has also had the opportunity to bring his research into the classroom. He designed a new course – HDFS267, Diversity and Self-Awareness – that was offered at UD for the first time in the fall of 2018. The course offered undergraduates an introduction to racial literacy that fostered a semester-long dialogue on race in America.

Talking about race can be difficult, Daughtry acknowledges, especially for white people who are reticent to reflect on the privileges they enjoy because of the color of their skin. Unfortunately, when white people pretend to not “see color,” they’re missing out on opportunities to learn more about racial justice. In his course, Daughtry worked with students to better understand institutional racism and process their white fragility.

“We need to promote healthy conversations around race that give people an opportunity to process their emotions, take responsibility for their racial attitudes and break down systemic racism in this country,” said Daughtry. “Activism is important, but if we’re colorblind—if we don’t see color—then we’re not owning our responsibility.”

Register for the event