Catching Up With Friends 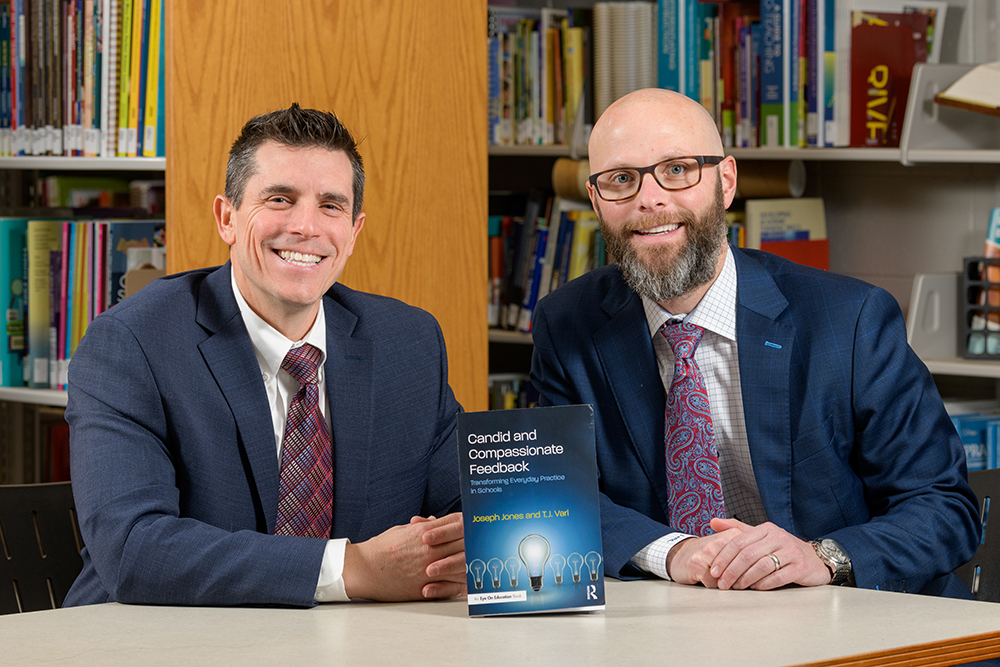 Alumni are an important part of our CEHD family.

See what exciting news has been happening in their lives in 2019!

Did you get a new job, win an award or write a book? Share your news with us.

During the CEHD Alumni Weekend Reception on June 7, 2019, we presented three awards to noteworthy alumni:

Three alumni and one graduate student from the University of Delaware’s College of Education and Human Development were named as finalists for the 2020 State Teacher of the Year Award.

* Rebecca Vitelli was named Teacher of the Year on October 15, 2019. She is Delaware’s nominee for National Teacher of the Year, a title she hopes will allow her to share her message about the importance of all children having access to quality early childhood education.

Jenna Albi, ETE ’15, is a special education teacher at Hardy Williams Mastery Charter School, a Title 1 school in Philadelphia. She was recently awarded two gifts on the Ellen DeGeneres show.

Carleigh Antico, ETE ’18, first-grade teacher at Success Academy Hudson Yards, won an Excellence Award in the Rookie of the Year category, which recognizes first-year teachers who have embraced the challenge and demonstrated exceptional growth.

Cori Breindel, HS ’17, is a first-grade ICT teacher at Success Academy Harlem 2 (ICT stands for Integrated Co-Teaching Class, which mixes general and special education students). Cori earned an Excellence Award for Growth, which recognizes educators who have exhibited exceptional progress in achieving excellence since the start of the school year.

Elena Delle Donne, HS ’13, was named the 2019 WNBA Most Valuable Player. She is the first player in WNBA history to earn the honor with two different teams as she was also selected as MVP in 2015 as a member of the Chicago Sky.

Samantha Leonard, HS ’19, recently published her first book, Groomed: Shining a Light on the Unheard Narrative of Childhood Sexual Assault, which raises awareness about the tactics sexual predators use to isolate and abuse their victims.

Nicole Magnusson, HS ’12, is a fully-licensed Financial Advisor with Point to Point Wealth Planning, a private wealth advisory practice of Ameriprise Financial Services, Inc. She is licensed in DE, MD, and PA.

Frank A. Newton, EDD ’10,  was named director of Newark Charter School, effective July 1. Newton has served in administrative and leadership positions in a variety of academic units throughout 25 years at UD, including associate dean for administration and operations in the College of Health Sciences, acting vice president and chief of staff for former Acting President Nancy Targett and assistant dean in the College of Earth, Ocean and Environment.

Jenna Roche, ETE ’19, is a special education teacher in a first grade class in Matawan-Aberdeen, NJ.

Casey (Howard) Shelor, ETE ’10, was inducted into the University of Delaware Athletics Hall of Fame as one of the most prolific goal scorers in the history of UD field hockey. She is a fourth grade teacher at Nellie Stokes Elementary School in Camden, Delaware.

Corey Webel, PHD ’10, associate professor in learning, teaching and curriculum at Mizzou University published an article on managing classroom discussions and group work in high school classrooms that was selected by the National Council of Teachers of Mathematics for their 2019 “Best of TCM, MTMS and MT” edition.

Emmanuel Caulk, ETE ’96, M ’02, was named 2019 Kentucky’s 2019 Superintendent of the Year. Caulk has served as superintendent of Ky’s Fayette County School District since 2015.

Laura Cutler, ECE ’03 and current PhD student, received the Excellence in Graduate Student Teaching Award from the University of Delaware. She is the sole instructor for a course in developmental disabilities.

Kevin Fitzgerald, EdD ’03, superintendent of Caesar Rodney School District was named National Educational Administrator of the Year in 2019 by the National Association of Educational Office Professionals.

Dorrell Green, M ’04 was named superintendent of Red Clay School District, the largest school district in Delaware, and named to UD’s 2019 Athletics Hall of Fame for his outstanding football career at UD.

Mark Holodick, Ph.D. ’08, will join the Delaware Academy for School Leadership as a senior leadership specialist. He had served as the Brandywine School District’s superintendent for 10 years.

Joseph Jones, Ph.D. ’07, was selected as superintendent of New Castle County VoTech School District beginning July 1. In 2018, he also published a book for school leaders on how candid conversations can improve schools. The book, Candid and Compassionate Feedback: Transforming Everyday Practice in Schools, was co-authored with fellow UD graduate, T.J. Vari.
Lindsay Bank Warsaw, ETE ’08, is teaching at PS/MS 206 in East Harlem, NY, along with four other UD alumni!

Deborah Bieler, BA, M‘97, is a faculty member in UD’s Department of English and is affiliated with the Sociocultural and Community-Based Approaches to Research and Education specialization in the School of Education. Her new book, The Power of Teacher Talk, is available through Teachers College Press.

(Please note, majors have changed over the years. Degrees are now referred to by their current listing, whenever there is an applicable equivalent.)